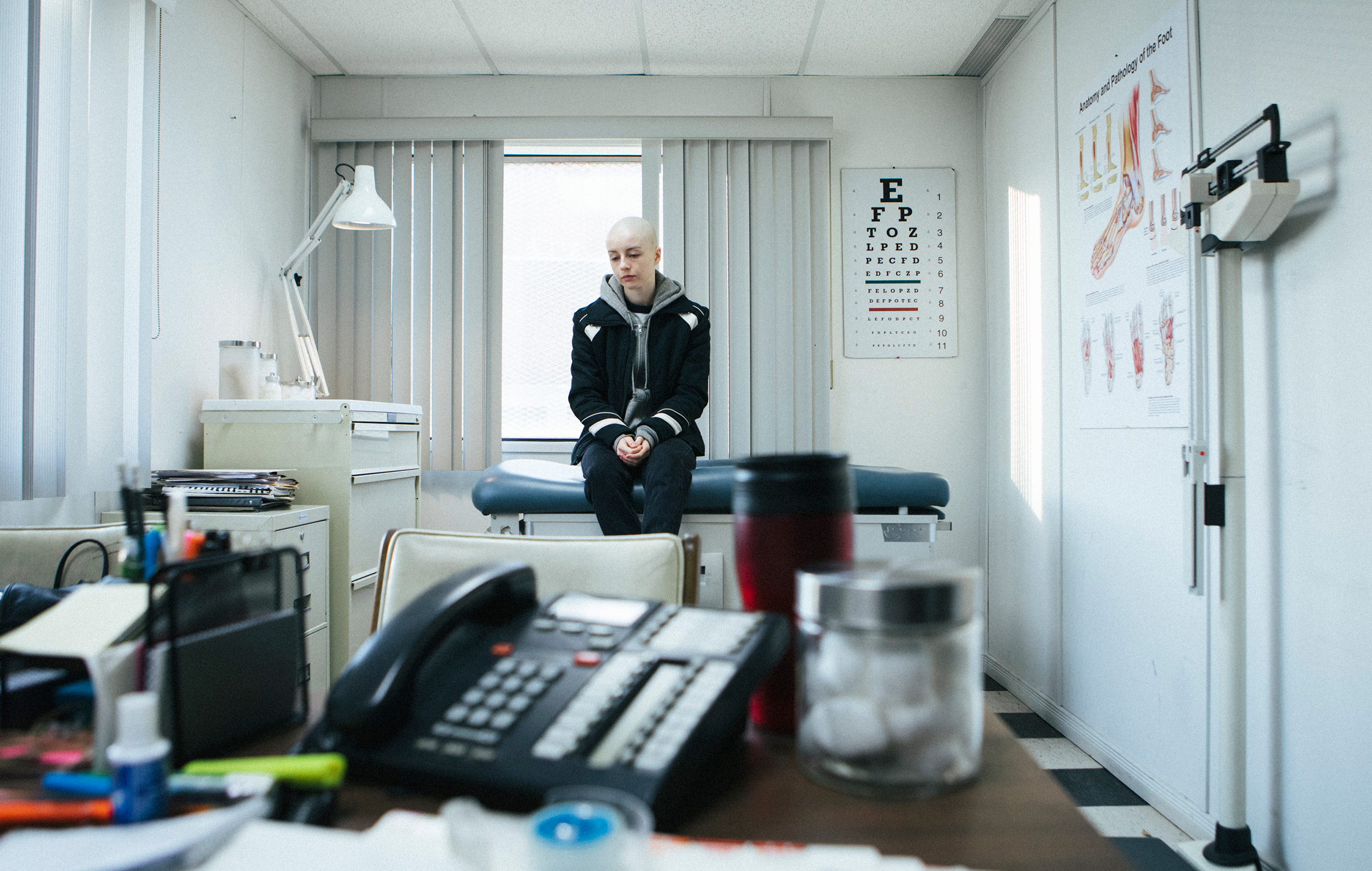 White Lie and the Fallout of a Toxic Charade

Yonah Lewis and Calvin Thomas waste no time establishing the premise of White Lie, the new film on which both share writing and directing credit. The movie revolves around Katie Arneson, a young woman who fakes being afflicted with an ambiguous melanoma. Katie is played by Kacey Rohl, whom you might recognize from The Magicians or her turn as Abigail Hobbs in Hannibal. In White Lie, she quietly dominates the screen in a virtuosic performance as a deeply troubled person surrounded by sympathetic, adoring people. Despite a large support network, she lives an insular, lonely existence, held captive by her pathology and prevented from having genuine, honest relationships by her commitment to the charade.

We’re first introduced to Katie while she aggressively shaves her head. We get a sense that the point of no return has long past. With every scrape of the razor, we feel the tension of the blade against her skull and her body resisting, as if Katie is slicing off bits of herself. In a sense, that’s exactly what the movie is about – the sacrifice of self to fuel a fabricated persona, which consumes much like the cancer Katie does not have.

The ominous score by Lev Lewis is tasteful and effective throughout the film. During the first few minutes of the movie, the music features strings punctuated by chaotic, seemingly improvised guitar riffs and drum fills, as if the truth is always on the cusp of finding a crack in the veneer and bursting out. The movie doesn’t make the audience ask “Will Katie be exposed as a fraud?” Instead, the question is “How long can she keep this up, and what will the fallout be?” Without spoiling anything, I can tell you that both parts of the question are answered in satisfying and frequently unexpected ways.

The cinematography by Christopher Lew is mostly static (or feels that way), and the direction by Lewis and Thomas is controlled in a fashion somewhat reminiscent of Yorgos Lanthimos, but with the scope of the performances maintained within more accessible parameters. The two components work cooperatively to convey a sense of Katie’s captivity, unable to level with several characters that have her best interest at heart, including her father (played by Martin Donovan) and her girlfriend (played by Amber Anderson). The notable achievement here is the presentation of a character that is virtually impossible to root for, but it doesn’t diminish the compelling nature of the film. It’s a very difficult target to hit, but Lewis and Thomas nail it, allowing for the story to unfold with very little perceptible judgment, as if the goal is to provide an unfettered glimpse into the life of someone behaving very badly as a pure curiosity, and not through a moral prism.

Katie’s cancer is at the forefront of every conversation, and much of the dialogue tends to be matter of fact as a result. It’s as if nothing else exists in Katie’s world besides her and her fake affliction. The people she’s surrounded by make it a point to ask about her health and directly communicate their support for her in her battle. Most of the characters aware of the truth are unscrupulous acquaintances ready to capitalize on her desperation to suspend everyone’s growing disbelief.

Watching Katie circumnavigate the mounting suspicions of those whose trust she repeatedly betrays while struggling to keep track of the details of her lies feels like having a front row seat to a nearly overturned train barreling down obstructed tracks with a sharp turn ahead, just before a crumbling bridge. You know it’s going to derail; you just don’t know when or how, or if there will be any survivors.

Indie filmmakers should watch White Lie, because the film serves as a prime example of a simple concept executed with precision and nuance, with confident pacing, a strong supporting cast (Anderson is magnetic as someone torn between a loving relationship built on lies and a painful acknowledgment of the truth) and an ending that is tragic, but not in the way you’d expect.

White Lie is available for pre-order now and on various digital streaming platforms on January 5. For more information, visit https://whiteliemovie.com/.