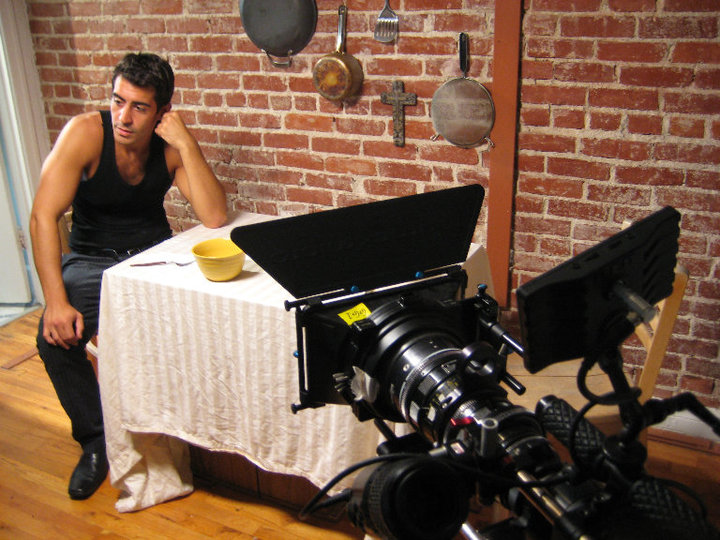 Nick Gregorio is a truly independent filmmaker with two features under his belt that he wrote, directed, and starred in. We spoke with him about returning to features to make his third movie, Christmas Eve, and the importance of representation. The KickStarter campaign is now live.

IFJ: Thanks for joining us. Can you tell us about your latest film, Christmas Eve?

NG: Thanks for having me and thank you for amplifying not only my project but indie movies at large. My newest project, Christmas Eve, is a decades-spanning story of an Italian American family celebrating the holidays in South Philadelphia.

NG: I wanted to spotlight Italian American culture and the place where I come from, South Philadelphia. More importantly, to share with the world a story that celebrates family, tradition, understanding, and portrays Italian Americans in a positive light. It’s been a rough year and I wanted to work on a project that made me feel good and could make other people feel good.

IFJ: What do you hope to accomplish in Christmas Eve in regards to Italian-American representation on screen?

NG: The type of Italian American my family is has never been depicted in film. I love gangster pictures like Goodfellas and The Godfather but those films only highlight one aspect of the Italian American experience: organized crime. My neighborhood was post-gangster. My family was matriarchal. We were loud, blunt, and diverse. Everyone worked and everyone loved to eat. It was far from perfect but it was a mix of professions, education, and world views. It wasn’t a monolith. I really want to show the progression of my family. The hand off from generation to generation and how this holiday meant so much to the family.

IFJ: You’re crowdfunding the movie. What should people know about the campaign and why they should contribute?

NG: This is my first time crowdfunding. My goal is to be authentic and when working on the teaser video I was so happy with how honest it came out that it felt right for crowdsourcing. I have a few different options for donation but my main pitch is: “$20 buys an advanced ticket to the movie”. There’s other tiers that offer various credits and my highest tier includes a family dinner with the cast and crew but ultimately I would be ecstatic if 15,000 people purchased their ticket in advance for $20. I think there’s something honest and refreshing about that process.

IFJ: Going into this feature with two under your belt is really impressive. Many filmmakers are reluctant to embark on shooting their first full-length movie. What was your experience prior to making Happy Birthday, Harris Malden, and how did that inform your decision to make a feature?

NG: I started making short films in a pre-YouTube digital world with a group of friends. We learned a lot by trying to produce a short per week. Digital technology was rapidly advancing and I knew that we had to make a feature length movie to take our production to the next level. Happy Birthday Harris Malden was shot in South Philadelphia on a modest budget (we all had to raise $8K each) and it had some success. It didn’t open all the doors I expected it to but I learned so much. Green was a different type of project. It had a super low budget and was shot in Los Angeles. I definitely took-on way more than I should have but, again, I learned so much. I really worked that movie through post by myself and it taught me the trades that I still use today to make a living. Green was also a small financial success for me. Even with having two features, I found work in the industry because of the skill sets that I developed making those movies but not necessarily because of the movies themselves. I’ve gone on to work with WB, DC Comics, and Amazon directing hundreds of projects for them including 45 shorts/sketches. I learned how to operate more traditionally, shooting primarily in a studio environment. A career in film and video production is a circuitous one but it takes that initial leap and then a commitment to stick with it. It’s a life-long vocation and you will never feel done.

IFJ: Between the release of your second feature Green and now, you’ve worked on varied projects, including Not Like Us (a narrative podcast), several short films, and shows for large YouTube channels. While pivoting away from features, were you waiting for the right idea? What helped you sustain your passion for making movies?

NG: There were a lot of pitches that never saw the light of day. I was producing and directing for Machinima which was owned by WB and then later we were acquired by Telepictures, also owned by WB. So much of what I was pitching was serialized or talk/documentary. Narrative is very hard to pitch at that level. But after Green I had planned to make a film called Glitter City Hustle which I co-wrote with our friend Jim Martin. It was a modern noir LA detective picture. We got so far as pitching it to Sony Crackle but it stalled out. Later I had a sketch comedy show called Dank/Fire with my producing partners from Machinima, Phil Lorgio and Cooper Hagedorn. We pitched a movie called Bad Influence. Kiss Kiss Bang Bang meets Youtuber/Influencers. We never got that one past the elevator pitch-phase. Then recently there was Not Like Us, which I turned into an audioplay podcast because of COVID. That project was going to be the next movie. It’s a one location, dark comedy horror thriller that takes place at a roadside bar and grill during a blizzard during a bodysnatcher invasion. The pieces almost fell into place! That’s the nature of this business. With Christmas Eve I really need to make this movie, I need to tell this story and I need to do it on my own terms. I have to go back to my indie roots and bring all of the industry knowledge I’ve gained along the way. The tools are there: amazing cameras, high end post production and I feel confident I can bring this project to completion.

IFJ: When you don’t have a big budget, you take on more responsibilities. What technical skills do you think are essential for independent filmmakers?

NG: The greatest asset an independent filmmaker has is time and when you’re young you don’t realize that. I wanted to get my movies out. I thought I’d be able to achieve overnight success and that’s not how it works. You have the time to refine your script without impediment. You have the time to storyboard most scenes and I strongly recommend that. If you know what you want to shoot and can give your DP a visual representation of that it cuts out a lot of steps on set. Find a good DP that you work well with. You have the time to rent cameras and test them out. Get a feel for their workflow. Explore and learn editing software. Chances are you will have to cut some of your movie. You’ll probably have to tweak the sound mix. You may have to sound design. Learn all of that and work on it. You have that time.

IFJ: Your first two features have been on Netflix, giving you a unique perspective into the evolving distribution landscape. What are your thoughts on the current options available to independent filmmakers?

NG: Distribution is tough. Harris Malden and Green both had a digital distributor that took a percentage of the profit but zero ownership. That was great for those movies because it was the early days of digital. The concept of streaming was very new. We made lump sums from platforms like Netflix and pay-per-views on gaming consoles like XBOX. With Christmas Eve my main form of distro will be a digital screener. If you donate you’ll get a digital watermarked screener of the picture, real simple. That’s my main goal. At this point in my career I want to make real movies that speak to an audience and come from an authentic place. If I can make this kickstarter work, I would be content with doing this process again and for as long as I possibly could.

IFJ: Where can people find you to stay up to date on Christmas Eve and your other work?

NG: Thank you so much for having me and thank you for all of the great questions. Really took me down memory lane. You can find and follow Christmas Eve at the Kickstarter link. It’s a 50 day campaign. You can find me on Twitter @NickGregorio and on Instagram @Nickvlogorio.