Mike Morelli’s latest film isn’t your average indie movie. Even the experience of watching the trailer leaves an indelible impression. We talked to Mike about scaling up from features and finding and embracing the tone that distinguishes his movie from so many other independent films available.

IFJ: Congratulations on your first feature, the fascinatingly titled ​Sh*thead​! Can you tell us what it’s about?

MM: Sh*thead is about a lot of things, but one of the things that’s really prevalent is toxic masculinity. The wars in Peru, the adulation of 12-foot-tall basketball superstars, I mean FaceFuka himself is a pure, walking embodiment of toxic male culture.

IFJ: What was the inspiration for the film?

MM: Growing up I was really bad in school, I got in a lot of fights and was usually in some sort of trouble. So I was friends with a lot of people the system would label as “Shitheads”. There’s just certain people that we as a society identify as not worth the effort and totally give up on. Maybe we could have the military beat some sense into them and ferry them abroad to occupy some foreign country, maybe not.

IFJ: What sparked your interest in filmmaking?

MM: Watching old Blaxploitation films from the 70’s on VHS. The movies are gold, but mainly for me it felt accessible from a practical perspective. Like that was something I could see myself doing.

IFJ: How did your experience making shorts inform how you approached making ​Sh*thead?​

MM: You kind of want to constantly scale up into a feature, start with a few shorts and make them a little longer and more complicated as your skills grow. And that’s really what I did. My last big narrative before Sh*thead was 40 minutes. At that point the leap to do a feature didn’t feel too steep.

IFJ: What did you learn from making Sh*thead that you wish you knew going into production?

MM: Stick to your preparation no matter what. You have to improvise a ton on set and that can lead to really amazing discoveries but, a lot of times you’re really just compromising. You have to come in prepared and try to stick to your plan as best you can.

IFJ: The trailer showcases the anarchic energy of the film and makes it stand out from a lot of other independent films, specifically the nano-budget movies that tend to be composed of mostly talking heads. Is this a conscious choice to distinguish ​Sh*ithead​ from other independent movies?

MM: Oh yeah. That whole style really took hold during our re-shoots, where I kind of decided to say “fuck it” and indulge in complete madness. The entire intro sequence, which the trailer is based off, I originally shot exactly in that typical calm, indie-film introduction to our world like you were saying. It was just a couple of simple set ups, wide, close ups, nothing too fancy.

Then, I insanely for some reason thought we might be able to license this awesome punk song from the early 80’s by the band Alien Sex Fiend. It was a pipe dream before I started production, I assumed I’d never be able to procure the rights to this song so I didn’t really look into it. But, I started rabbit holing down how to get in touch with the band, I somehow got in touch with their manager, and yeah, they were cool with us using the song, the record company gave us a rate that was actually pretty decent for a feature film and we ended up getting permission to use it.

After I had a hand-shake agreement that we could potentially use the Alien Sex Fiend song, I did more re-shoots with a super slow motion camera and shifted the tone of the editing to match the fast pacing of the song. So we ended up building that style we have pretty late in the game and, to me, I think it’s one of the coolest and most unique aspects of the film. That’s why I love their music, it’s a mix of unbridled rage, chaos, it’s funny and clever, and spits in your eye in a totally endearing way.

IFJ: When you set out to make Sh*thead, did you have a specific objective in mind? What do you hope it will lead to?

MM: More than anything else I set out to make a good movie. I wanted to make something we all could be proud of.

It’s been such a long process, I’m hoping Sh*thead will earn enough money for me so one day I can open up my own Amusement Park and I want someone to develop a strain of dark, blackish weed called “Chenko”. Come on stoners!

IFJ: If you’re able to discuss it, what was the film’s budget, and how was it allocated?

MM: Our film was financed by Nigerian Dentists that I met on the internet, so our budget was something like 8 Billion Yen. Not sure why it was in Japanese currency, or what the exchange rate maths out to, but yeah.

IFJ: How did you raise the budget?

MM: One day I was clearing out my SPAM folder and I saw this sweet email from a Nigerian Dentist. Turned out he had all this money he wanted to give me. I didn’t sleep with anyone, if that’s what you’re implying…

IFJ: Can you give us a breakdown of the production schedule? How many shooting days were there, and over what period of time?

MM: We did a 15-day run over the course of about a month that was when we filmed the bulk of the movie. That was cool, but once we decided to do re-shoots and shifted into this kinetic, hyper fast style it sort of snowballed into what I used to call “the Vietnam War.” I think we ended up shooting for something like 105 or 110 days in total, something absolutely bonkers if you include all the little visual effect shoots.

I didn’t want to compromise on the quality, we would rework scenes sometimes 2 or 3 times until it felt right. And the style sort of perpetuates this ultra intense filmmaking process, you have lots of cuts so that means lots of set ups. And then, when you want to have something that utilizes close ups, the amount of time it takes to get those perfect close ups is too great to waste with your talent, so there were so many days that were just inserts, VFX plates, tiny little details like that. The grunt work of filmmaking.

IFJ: What gear did you use to make the film?

MM: It was shot on a combination of a couple cameras. We used a RED and then a BlackMagic Production Camera for a few scenes and also all of our Super Slow Motion material was shot on Sony.

IFJ: Did anything come up during production or post-production that forced you to make substantial changes to what you captured or the edit, and how did you arrive at the solution?

MM: Of course. Like I said, we did do re-shoots and that was after I had a full on rough cut of the picture. It was such a fantastic process, after I got to see the footage I really collaborated with Johnny and Erica and Tim and the whole cast to find any way we could make the movie better. And in that process the film took on more ideas that weren’t just mine, I got to pick things from other people’s brains and influences.

IFJ: What’s the most valuable filmmaking lesson you learned from making ​Sh*thead​?

MM: You are not your movie. No matter how much of yourself you give to your film, the movie is its own thing. It’s not you. The movie is going to run through the rollercoaster of ups and downs to get itself made. If you live solely through your film you’re setting yourself up for a lot of heartbreak.

MM: I was also Johnny’s stunt man too, that was probably my least favorite for sure. So, anytime you see him jumping, falling, I would just like put on the clothes and really do it and fall and fuck myself up.

No matter how insane things got, I can say I enjoyed every aspect of it all. It was just a dream to be able to make a movie, to meet some incredible people and establish relationships that will last a lifetime. That’s truly the best part of getting into this crazy business.

IFJ: Sh*thead has won multiple festival awards for best visual effects. Do you have any advice for filmmakers that want to incorporate VFX into their movies but don’t have a lot of experience?

MM: Let the story or your concept dictate whatever VFX that you do. If you’re going to do a visual effect just to show off something that you know how to do, ok cool but first make sure you don’t forget about story and characters, and maybe, what if there’s a better way to do it without the effect. VFX works best as a tool to convey an idea, not an idea to convey your skill.

MM: Well I’m trying to kidnap the pets of famous people, hold them for ransom until they tell everyone to watch Sh*thead. Like if I have your dog, and all you have to do is just tweet to your 90 billion followers to go watch Sh*thead to get it back, you’re gonna do it. Right?

IFJ: Do you have any other projects lined up?

MM: We are going to make some Sh*thead sequels and spin offs, for sure. I’m envisioning this is as the beginning of the Sh*thead Cinematic Universe. I want to churn this shit out like sausage, eventually do a crossover movie. Kill everyone off. Reboot it with a darker, grittier tone ten years from now. Make sequels to that. Kill everyone off again. Reboot it with a lighter, more upbeat tone. Make sequels to that. Do a bigger crossover movie with even more characters and then kill all those characters off. This is gonna go on forever….

IFJ: Where can people find you online to stay up to date on Sh*thead and your other films?

MM: Our website ShitheadTheMovie.com has links to all the places you can watch the movie, you can follow us on Instagram or check out me out on Vimeo 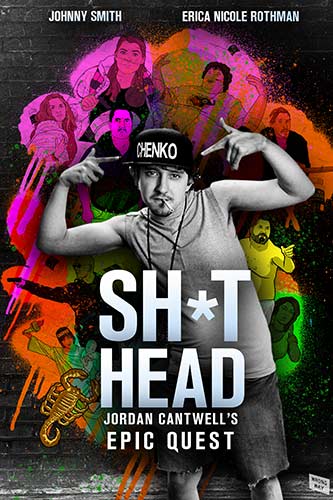 Jordan Cantwell's epic quest to see his favorite face-painted rapper and get as high as possible hits a snag when he is unable to score drugs. Undeterred he tries to sell his girlfriend's baby.