Making a contained thriller in the tradition of Buried, Locke, and Brake is a smart way to establish a (more) controlled and consistent production environment than you would likely have if you had to deal with multiple locations, and that’s what makes Cargo, the feature directed by James Dylan, produced by J.C. Macek III (co-written by both), such a fascinating case study.

IFJ: Congratulations on the release of Cargo! Can you tell us what it’s about?

JD: Cargo is a one-man horror thriller about a businessman named Anthony Peterson trapped in a cargo container with a cell phone who is given 24 hours to raise ten million dollars in his own ransom.

IFJ: Writing a script to back into available resources or preset limitations can be challenging. What was the development process like for Cargo?

JD: I worked with my producer J.C. Macek III on the screenplay, he gave me a number of good pointers and insights. He is also the published author of the Cargo novelization by Bloodhound Books.

IFJ: Making a contained thriller is a smart way to simplify a lot of physical production logistics, but it also comes with unique challenges, like getting diverse shots in a single location, which can also be tight. What did you do in pre-production to maximize the cinematic and entertainment value you could get out of limited locations?

JD: Made a detailed shot list and made it a point to constantly make the film interesting visually in each set up.

IFJ: What was the shoot like? How many days over what period of time?

JD: The shoot was fairly smooth save for the Dog From Hell next door that at times would not shut up. It was filmed in front of my cinematographer’s front yard of their new home. It was a quiet Los Angeles suburb yet we got unlucky in one aspect and were shooting by the one insane dog in the neighborhood. We managed to work around it though when we shot the film over the course of eight days. The shoot was rough at times on our leading man Ron Thompson since he’s literally the only actor on screen.. Ron said the great thing about Cargo is he’s in every scene and the bad thing about Cargo is he was in every scene.

Ron was a true professional though. I felt we pushed a bit too hard at times. At one point he said he was literally going to faint between scenes. Yet he pounded down an energy drink and managed to finish the day’s filming on schedule. Plus he literally lived in the house outside the cargo container during the shoot.

I’ve wanted to work with Ron since seeing him in such classic films as American Pop, American Me and the TV series Baretta as Robert Blake’s sidekick Nopke. Ron said once his favorite episode of Baretta co-starred Joan Collins called Pay or Die.

IFJ: What equipment did you use to shoot the film?

JD: We had a skeleton crew and we shot on a Red. The biggest problem was renting the cargo container. My cinematographer had the idea to paint the white interior black and paint it white again once we returned it.

IFJ: What was the post-production workflow?

JD: We recorded all the voice over actors the day after filming wrapped. We had Eliot as our off screen villain, as well as Danika Fields as our main character’s trophy wife, Mark Wood as Tom, the main character’s right hand man as well as director and actor Corbin Timbrook in the role of Sully, Matt Rosvally as Evan, Jose Rosete as Merc and our producer J.C. Macek III doing a number of voice over roles as well.

IFJ: Did you have a marketing and distribution strategy going into production?

JD: We managed to land a distribution deal in post production with Wild Eye Releasing. The film had a theatrical run in select cities before going to VOD, Amazon, Tubi TV and other outlets.

IFJ: What was the budget (if you’re able to disclose it), and how was it roughly allocated?

JD: The majority of the budget went into post production and getting really dynamite sound effects. The sound effects and the music became two whole other characters in the film.

IFJ: What did you learn from making Cargo that you wish you knew going into production?

JD: That minimalist filmmaking can be as challenging as big budget films and as big a blast..

IFJ: Are you working on any new projects?

JD: I’m finishing up a number of writing projects. Most of them in the thriller, horror or action genre. And possibly a Cargo sequel at some point.

JD: I can be found social media, cheers. 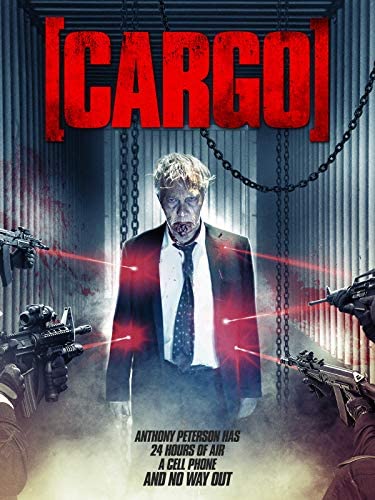 A businessman awakens to find himself trapped in a cargo container and held for ransom.