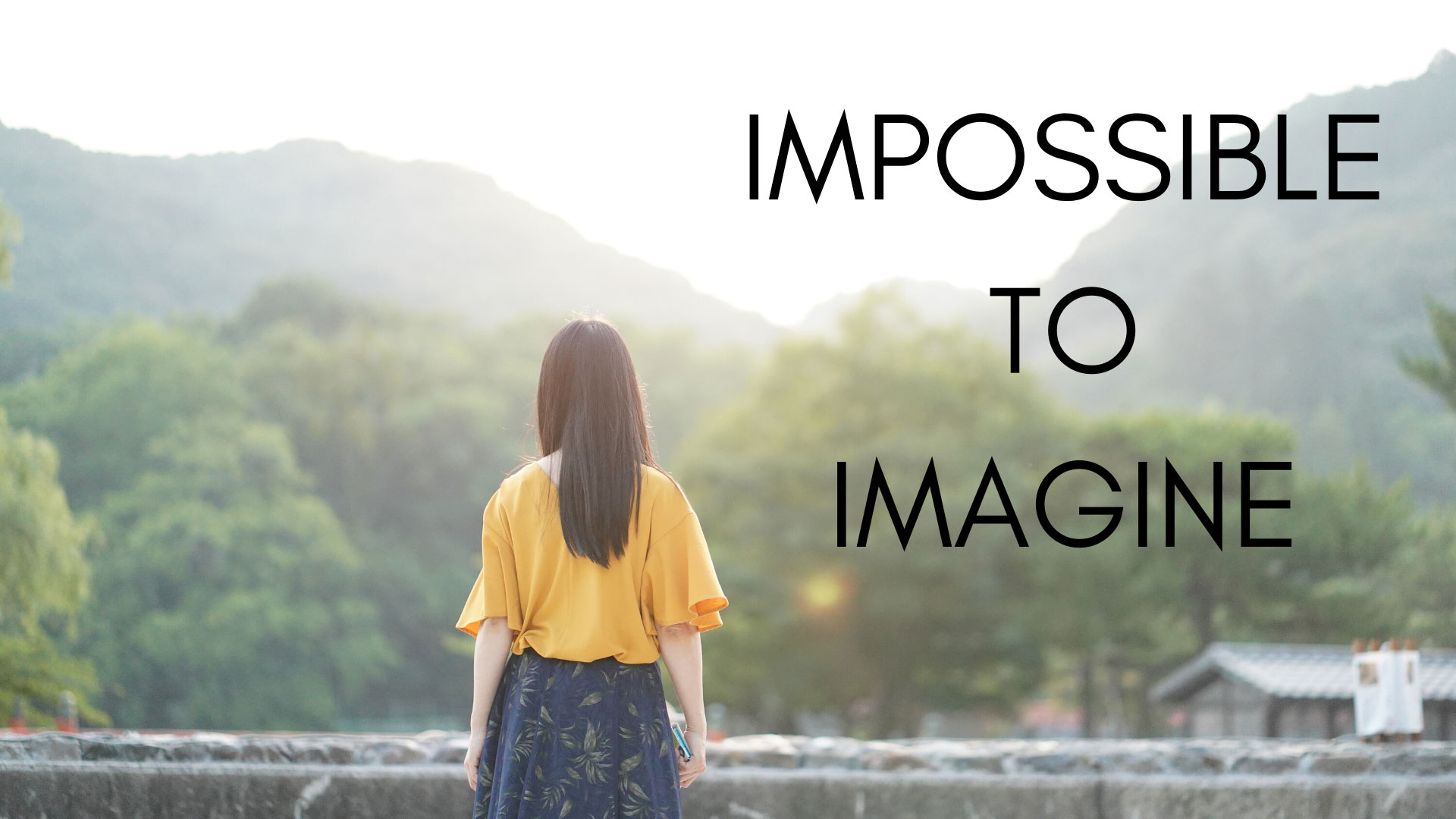 We spoke with writer/director/cinematographer Felicity Tillack and producer Hamish Downie about their new film that tackles the subjects of multiculturalism and identity in Japan. The movie is Impossible to Imagine, and the making of it is a story as fascinating as the film’s plot. Watch it now on Vimeo and be on the look out for other ways to see it in the future.

IFJ: Thanks for joining us. Can you tell us what Impossible to Imagine is about?

FT: It’s a love story. It’s about a traditionally minded woman living in Kyoto and running her late mum’s kimono shop, but having a hard time doing it. She gets introduced to this successful business consultant, who is Australian-Japanese, and who’s manners and attitude initially rub her the wrong way. However, through time and working together successfully, they fall for each other. Unfortunately, they still have a really different way of seeing the world, and this leads to them clashing. The main question of the film is, “can they change enough for each other?”

IFJ: What inspired the concept of the film?

I had just made a documentary about 3rd culture kids in Japan, and was very affected by the responses to the “where is home?” question, as the interviewees born and raised in Japan, really struggled to identify where “home” was. As a primary school teacher, I work with a lot of biracial kids, ha-fu, who also really struggle with their identities and with some kids it’s like they have to take a side. But things are changing, I believe, and there’s a lot more visibility and understanding of non-Japanese and biracial Japanese in society than there used to be. I wanted to show Japan on the edge of this change and that identity struggle for biracial people here – which I’ve since learnt is definitely not confined to Japan but experienced strongly by Australians of Asian and African heritage as well.

IFJ: You’re originally from Australia. Can you tell us how you ended up making a movie in Japan?

FT: Good question. I’ve been here since 2006, and only picked up a digital camera in 2008. I started making short travel related videos on my Youtube channel, Where Next Japan in 2012, and my love of video and editing grew from there. Around 2014, I fell in with a group of indie filmmakers, including Hamish Downie, and learnt a lot by working on their sets, and was inspired by them to try to make my own.

IFJ: Can you walk us through your writing process?

I start with the message. What do I want to say with this film? And then I try the best I can to tie everything in the plot to that message. Next I think of the characters – I’m still a reasonably new writer so building opposing character types is the simplest way for me to generate drama. So she is traditional, he is very future focussed for example. To build the characters I did a lot of interviewing with biracial people raised in Japan – including William who became the main character in the film. A lot of the lines are direct quotes from these interviews.

IFJ: Did the script evolve during pre-production based on logistical developments and limitations?

FT: Pre-production wasn’t really a thing on this film but the script evolved constantly. I listened to my translator’s comments, and the actors when they felt something seemed unnatural or not what they thought the character would say. I spent a lot of time scouting the locations by myself, and they were either close to my house or at the beautiful Camellia Garden tea house, to keep things simple. The biggest changes were when we were almost finished shooting, and either Hamish (my producer and mentor) said that the story was moving too fast and we needed to slow it down or my beta-viewers struggled to understand something. We spent an additional couple of days shooting those extra scenes, but they were definitely worth it.

HD: One of the biggest evolutions was going from a short to a feature. The original script would have made a 50 plus minute film, so I recommended that Felicity expand the story to feature length. It turned out to be the right decision as Felicity has been able to explore the idea more deeply. The other thing I suggested was to film with local actors on weekends. Thanks to that, the audience can authentically feel the progression of the seasons, and it made post production much simpler.

IFJ: How did you finance the movie? Did you bootstrap it, or did the backing come from investors, crowdfunding campaigns, or some combination of the three?

FT: Bootstrap, I guess. I self-financed it, but a lot of the crew and most of the actors were volunteers.

IFJ: What was the budget, and how was the money allocated?

FT: It cost about 10,000 AUD by the end and most of that was on food. The translator got paid per section, and the main actors got a day-rate, but very token. The colourist and music editor, as well as the theme song composer got a small thank-you amount. Since then, festival fees have chewed up a bit. I hope that this film shows that we can make films efficiently, but also attracts some investors for future projects so that everyone can get paid properly.

FT: Panasonic GH series cameras – the GH2, GH3 and GH5. In future, I’d definitely try to use all the same camera to help with colour correction, but they did a good job. I’d like to invest more in lights in the future for sure – we used as much natural light for this one as possible.

IFJ: How long was the shoot? How many days and over what period of time?

FT: It was all on weekends, and we shot about 10 times over 9 months, mostly on Sundays, from 8am to 6pm (while there was light). I edited in between each day of shooting, and then it took a few months to get the colour and audio correction finished at the end. Altogether it took a year from the first day of shooting until our premiere.

IFJ: How large was the crew?

FT: It really depended on the day. Some days there were a lot of crew so we had someone on slate, and a BTS photographer, and an AD and everything. Other days, it was me and my sound guy, Shota, and the two mains. I think altogether maybe 10 people helped as crew and then maybe 25 people altogether including actors assisted in making the film.

IFJ: What’s your strategy for planning shots and making sure you captured everything you need?

FT: I found that storyboarding helped me visualise the shots a lot more clearly, and helped both explain to the actors what I wanted, and made sure I didn’t forget what shots I wanted. I had a very detailed shot list as well, which listed everything including what lenses I was thinking of using.

IFJ: I see you wore a lot of hats throughout all stages of production. Besides directing, which jobs would you enjoy doing again, and which would you hope to be in the position to delegate?

FT: I like the control that writing, directing and editing allow, so I wouldn’t want to stop doing those three things in a production. I love camera work too, but I’ve come to realise that it’s hard to DOP and direct, so I would probably look to work with a cinematographer in future. Catering as well is not my strong suit, so I would love to have a professional along to do that.

IFJ: You also edited Impossible to Imagine. What was the most difficult challenge you faced in the edit, and how did you resolve it?

FT: There are a few scenes which were meant to be consecutive but we shot them out of sequence and we weren’t careful enough with the continuity and William ended up wearing different shirts in the different scenes… I was forced to move a lot of things around, and eventually even wrote in another scene between the shots, so it all worked out ok in the end. I see editing as a jigsaw puzzle though, so even with the script and the shot list there as a basis, there can be a lot of moving things later around to find the perfect flow.

IFJ: What is your marketing and distribution strategy?

FT: The film attracted attention from the universities here in Japan, so a lot of my initial marketing was towards them, and I would come along as a guest speaker to talk about themes of mixed cultural identity and multiculturalism in Japan. I sent the films to a few festivals, and was screened at some. I also got a few websites to review the film. Now I’m signed with an agent, The Movie Agency, who is handling the negotiations with distributors. The film is now on Vimeo, and will soon be online and also on DVD through Bayview Entertainment in North America. It’s all a big experiment, and I’m just seeing what works.

IFJ: What is one thing you learned from making Impossible to Imagine that you wish you knew going into production?

FT: I don’t know… ignorance is bliss in many respects. I don’t know if I could do a film in this way again. But it was a really good experience and most people who joined us speak positively about it.

FT: I might be working on other people’s projects in the near future as a script-writer and camera operator, so I’m excited to sharpen up my skills again. A sequel has actually been written and has a group interested in producing it. We just need a little more financing and, of course, for it to be safe enough to film.

HD: we’ve also got a musical in the early stages of development.